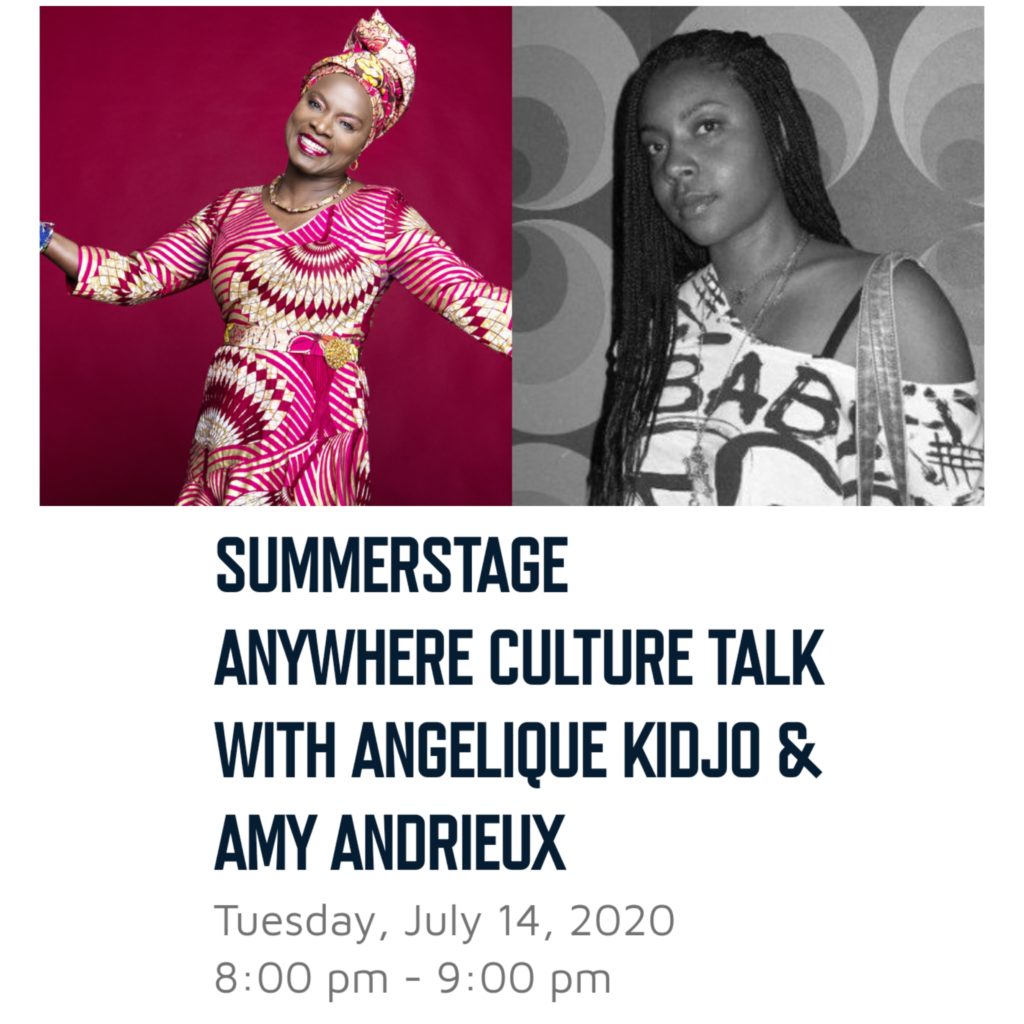 Angelique Kidjo and veteran of global editorial programming Amy Andrieux. The two iconic and incredible women of color, will be live on Summerstage’s YouTube + Facebook pages @ 8pm EST for a Culture Talk – an in-depth and intimate conversation with the artists focused on their connection to New York and how the city has influenced their work. 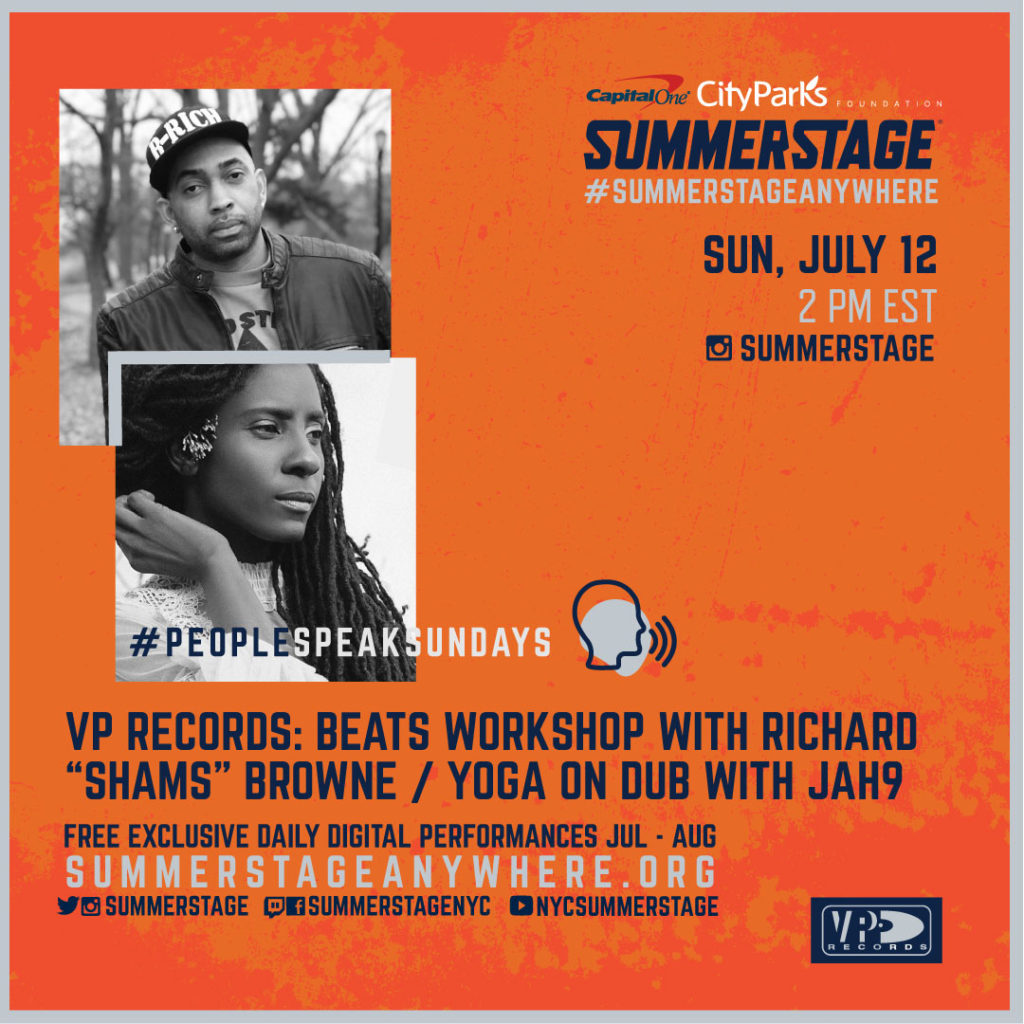 Capital One City Parks Foundation SummerStage is thrilled to announce the continuation of its free digital series SummerStage Anywhere. The platform will offer one-of-a-kind digital arts content daily kicking off the week of July 6th. The #PeopleSpeakSundays curator takeover will launch this Sunday, July 12 at 2:00 PM EST with special guest curator VP Records. This special collaboration will feature a beats workshop with A&R at VP Records and legendary reggae/dancehall producer Richard “Shams” Browne, as well as a Yoga on Dub session with reggae songstress Jah9 live on the SummerStage Instagram channel.
Fans can get in on the action with SummerStage Anywhere’s #PeopleSpeakSundays campaign. Every Sunday, SummerStage will offer their “stage” to voices from down the block and around the world. This Sunday, they are partnering with VP Records. MC’S, lyricists, poets and writers can post their video entry today using the hashtag #PeopleSpeakSundays for a chance to win a beat produced by VP’s legendary producer/A&R Richard “Shams” Browne. Contestants have the chance to premiere their piece on the SummerStage IG channel on Sunday, July 12th! 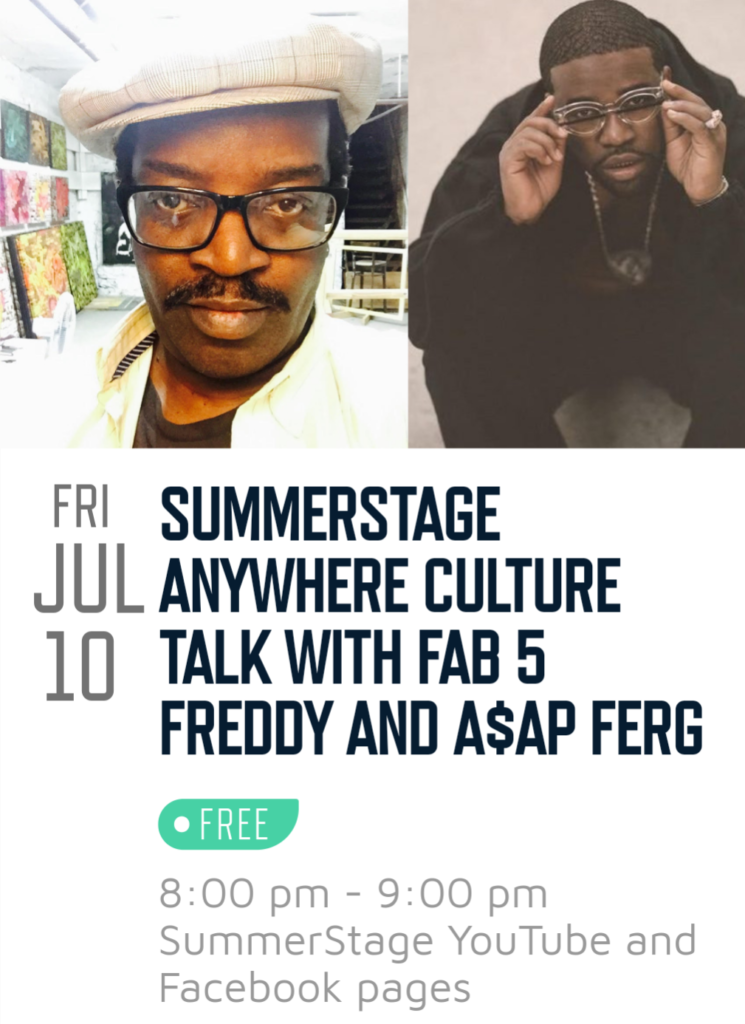 Born Fred Brathwaite to Jazz loving parents in the Bed Stuy section of Brooklyn N.Y., Fab’s introduction to pop culture came courtesy of a name check on the pop group Blondie’s 1980’s hit, “Rapture”. “FAB 5 FREDDY told me everybody’s fly”. That line was Fab’s calling card and introduction to the world of pop culture. He initially exploded on the scene in the late 70’s as one of the first Graffiti artist to exhibit his paintings internationally. Along with close friends and contemporaries, Futura 2000, Keith Haring, Jean Michele Basquiat, Lee Quinones and others, Fab was key in getting the art world to realize New York graffiti was spawning an art movement that would eventually pulsate globally until today, and give birth to street art. Like many creative figures from the New York downtown scene in the 80’s Fab would explore other modes of creative expression. At the seminal Times Square Art show that his work was featured in he would link up with budding filmmaker Charlie Ahearn and come up with the idea that eventually became the cult classic and first film on Hip-hop culture, “Wild Style”, which he also produced, stars in and composed all the original music for. After numerous solo exhibits and group shows in the late eighties Fab wanted to reach a broader audience so he decided to expand on his experiences making the film Wild Style and direct music videos. His first assignment was the song “My Philosophy” for Hip-Hop legend KRS-ONE. Fab would go on to direct numerous videos and commercials for artist like, Queen Latifah, Nas, Snoop Doggy Dog and companies like Pepsi. But shortly after settling in behind the camera in the late 80’S, MTV, feeling the cultural pressure asked him to host a program called, YO! MTV Raps, which immediately becomes the highest rated show on the channel and blasts Hip Hop culture into the living rooms of mainstream America and millions on several continents and countries around the world. Nearly ten years later Fab departed MTV to embark on business ventures including a brief stint as the head of independent label Pallas records where he signed, executive produced and created all the visuals for the million selling Chicago rap group, Crucial Conflict. While continuing to satisfy his creative passion with art, film, music and television projects, Fab, considered one of hip hops architects and pioneers has lectured at schools and universities around the world, published numerous articles for various publications including Vibe, XXL, The New York Times Magazine and written a book on hip hop slang entitled Fresh Fly Flavor, Words and Phrases of the Hip Hop generation and he served as an executive producer for the Vh1 Hip Hop Honors TV specials. Today Fab is focusing on making visual art, exhibiting his work, and was recently featured in the Los Angeles Museum Of Contemporary Art, “Art In The Streets”, the block buster exhibit that was a historical survey on graffiti and street art and being the chief creative consultant of The Africa Center. 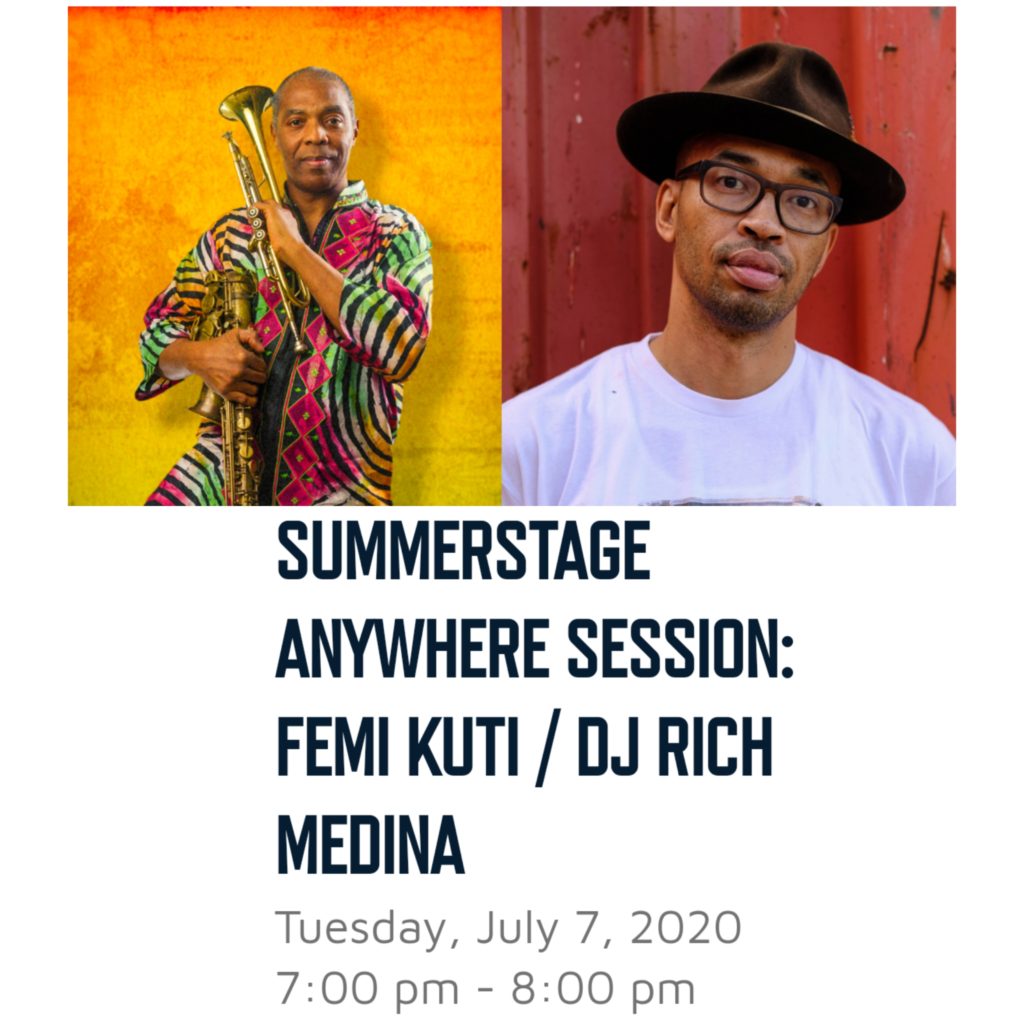 Femi Kuti (7pm-7:30pm ET) and DJ Rich Medina (7:30pm-8pm ET) will be live from the iconic and emblematic venue, The Shrine in Nigeria, from 7pm-8pm ET, and the stream will be available to watch via Summerstage’s Facebook and YouTube pages.

Femi’s father, Fela Kuti created in Shrine in 1970, and just seven years later, it was burnt down by the African government. In October 2000, on the third anniversary of Fela’s death, Femi opened The New Afrika Shrine in celebration and in honor of his father’s memory. The venue is known for artists using their voices to fight back against government corruption and challenge important issues. This show will be very special, especially given the current climate of the world, and this will be a show that is exclusively for the Summerstage Anywhere Digital Series.